The US Bureau of Economic Analysis released its estimated annual rate of GDP growth for the first quarter of 2016 and the news was disappointing to say the least.  The US economy grew at the rate of .5% in the first quarter of this year.  That followed an annualized rate of growth of 1.4% in the fourth quarter of 2015, putting total GDP growth for 2015 at 1.9%.  While some commentators have expressed concern that the upward curve in this business cycle, which is eight years old, is too mature to last much longer, the construction sector continues to exhibit strong growth.

Ken Simonson, chief economist for the Associated General Contractors of America, was upbeat in a recent press release, stating, “construction should be a significant contributor to economic growth in the remainder of 2016 and beyond.”  So, in spite of what could be some softness in the broader economy, the general consensus seems to be that construction will continue to grow through 2017, which is good news for all of us. 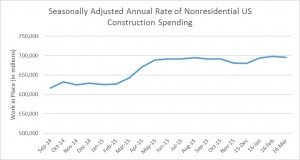